The spirits of good time provocateurs like Louis Jordan and Fletcher Henderson are returning to cut loose in the heart of Canonbury in North Islington. At the forefront of this local renaissance are a 7 piece swing ensemble called The Silver Ghosts, whose apparitions manifest once a month at local gastro bar ‘The Canonbury’. Their material was originally written or recorded in the period from 1920 – 1949, but their distinctiveness does not end there; the performance style is very danceable, being specifically designed for period partner dances like Lindy Hop and Charleston, as well as less well known dances like Balboa that were popular in the 1920s. Consequently, they attract social dancers from miles around to enjoy the juke joint style party atmosphere, revelling in the evocation of hot, breathless and high spirited dance gigs of the era of both hedonism and heroism.
“Our influences range from Billie Holliday to Miff Mole, from Louise Armstrong to Hoagy Carmichael” explains band leader and trumpeter Mark Aguera, (‘The Colonel’ to those in the know.) 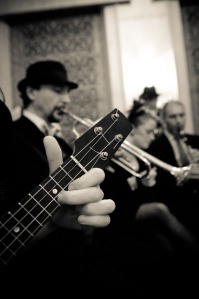 “We started just over two years ago when I suggested to my friend Karl (Caps) to learn the ukulele. We had been inspired by the energy and style of swing dance club nights around town like ‘Mouthful O’ Jam’ at The Salisbury in Harringey and ‘The Black Cotton Club’ in Chancery Lane. The DJs play nothing but original 78s on period equipment while patrons express their passion for swing jazz, sometimes just through their period garb but mostly on the dance floor with classically energetic partner dances.” It didn’t take long for the band to settle as their current 7 piece line up of trumpet, trombone (Tea Bone), clarinet (Lips), ukulele (Caps, Ukulelsley), double bass (Monkey, The Man, Cookie), drums (Bugsy) and with the charming Lucy Lullaby on vocals.

The Silver Ghosts have since performed at the prestigious Royal Albert Hall, Floridita in Soho and The legendary 100 Club, but it is currently The Canonbury in N1 where The Silver Ghosts return every month on the 2nd Tuesday. It is that evening, known as ‘The Canonbury Caper’, that has led to a local revival in swing dancing to live music not seen since the days of Count Basie and Louis Jordan.

With felt fedoras and buttoned up waistcoats, their look is the bees knees, right down to the obligatory silver ties and complementary silver tie clips. And Lucy is ever the glamorous chanter. 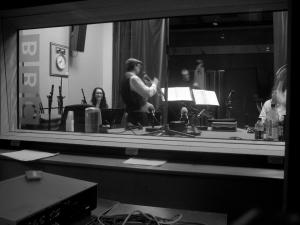 “The look is considered an important part of our evocation.” The Colonel reveals. “Some of us know a few period partner dance moves as well, and sometimes we like to swing out while we’re performing.
“We are committed to performing as the extended seven piece lineup, as well. During the period that provides our inspiration, larger ensembles lead by brass and woodwind instruments that were able to play ‘unplugged’ were the way things stood.”

It seems that despite the changes in culture, economics and technology, The Silver Ghosts are to continue recreating the authentic ensemble swing jazz sound, which means, thankfully, the revelling ghosts of good times past are here again.